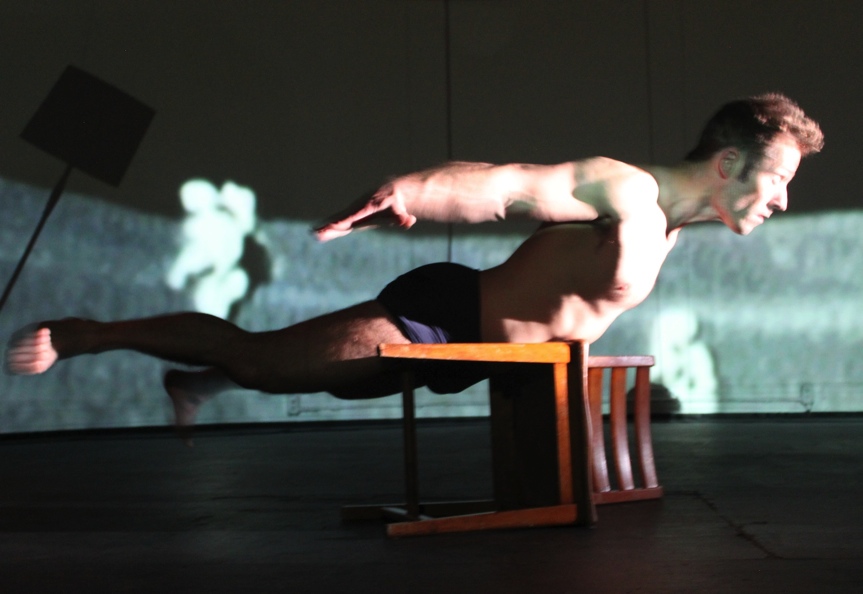 A lone figure appears on stage and begins an elusive conversation with the audience that, over the course of the performance, emerges as an attempt to piece together the details from a pivotal moment in his life: the years 1968 and 1969, in which he would have been 5 and 6 years old, and which seem to be the last that he can remember. In an unconscious attempt to make sense of the fragments, he further draws on a range of mediatized images and sounds that would have been available to him as a child. Ultimately, the “story” he tells the audience – and himself – is a pastiche of these personal and public memories, which culminates in the reconstruction and revelation–to the character as well as the audience, of what is apparently the final memory of his ‘real life’: his accidental drowning on the night of the Apollo 11 moonwalk.

Swimmer (68) focuses on the complicated meeting between two forms of identity. It explores an individual’s relationship with the mediated messages of a lifetime – published, broadcast, televised, projected, and otherwise electronically communicated. That is, it takes place in the deep and troubled overlap between personal memory and mediated memory.  Swimmer (68) is an attempt to not drown.

“Director and co-creator Bruce Barton’s elegant use of a few props, lighting and space generate an immensely suggestive mise-en-scène … the actor’s buoyant performance and the beautiful production capture a world with less gravity than our own.” NNNN Naomi Skwarna (nowtoronto.com)