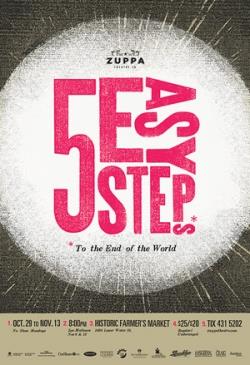 5 EASY STEPS (TO THE END OF THE WORLD)

“It is the night of the end of the world, and three friends isolate themselves in the cluttered basement of a pawnshop. Determined to go out with a bang, they conjure an evening that is both a dance party and a painful meditation on the past, future and the ever-elusive present.”